Lupus and the Biology of Digestion

More than 50% of those with lupus experience some kind of digestive system disorder.  Here is an overview of this complex part of the human body and how it can be affected by lupus, lupus medications and other conditions associated with SLE.

Lupus is an autoimmune disease that can attack almost any part of the body, such the kidneys, skin, joints, muscles, lungs, blood and even the brain. However, one part of the body that often gets overlooked is the digestive system – even though it is one of the most commonly affected by SLE.  Though digestive issues tend to be less publicized than conditions like lupus nephritis, the symptoms associated with it can also lead to life-threatening situations if not properly treated. Moreover, recent research has shown how critical nutrition and gut health can be to the quality of life for those with lupus, and increasingly the digestive system is being found to have real effects on possibly triggering flares or causing the disease itself. So, it is important to have a basic awareness of your digestive system, and to understand how lupus and your medications can both affect your digestive health and be affected by it.

Fact:  Approximately half of the digestive symptoms that are common to those with SLE are caused by adverse reactions to medications or viral and bacterial infections.

Basics of the Digestive System

The digestive system itself has several names:  the gastrointestinal (GI) tract, the alimentary canal, the digestive tube, and of course, “the gut.”  Whatever name you use, its primarily role, of course, is to get food nutrients from the outside world into our bodies. For this to happen, the digestive tract must be able to take food in whatever form we give it (ingestion), process as much of it as possible with strong acids and enzymes to get those nutrients broken down to the molecular level (digestion) so that we can bring them into our blood stream (absorption) and get rid of the stuff that we don’t need (defecation).

One amazing thing about the GI tract is its ability to be delicate and permeable enough to absorb so many kinds of chemicals – from sugars and fats, to vitamins and all those medications, and yet be strong enough to keep out harmful pathogens like bacteria, viruses, parasites and other bad things that we consume every day. 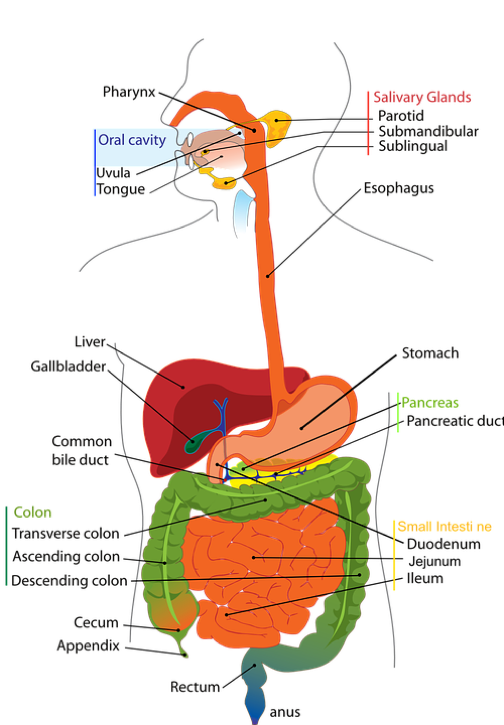 Yet, there is so much more to the digestive system!  Here is just a brief list of facts that may help you the next time digestion is the theme of your next trivia night!

When you are under stress, the sympathetic system interferes with healthy digestion because that part of your brain wants you to focus all of your energy on getting out of the stressful situation.  So, you stop producing saliva (you get dry mouth), you may have difficulty swallowing (you have a “frog in your throat”), your stomach stops churning and it feels either too acidic or bloated, and your intestines slow down dramatically and stop absorbing nutrients. Suffice it to say that chronic stress, like the kind you might get from chronic diseases like lupus, can be rough on your digestive system – even beyond the symptoms of the disease itself.

As you can see, the digestive system is surprisingly complex and can be affected by lupus and other diseases in all sorts of ways.  It is important to take a look at both the general affects that you feel (nausea, lack of appetite, etc.) as well as symptoms that are specific to areas of damage (focused pain, visible sores, etc.) in order to make an accurate diagnosis of your condition.  This helps your healthcare profession and you to differentiate which issues are causes and which are effects.  A description of some of those general and specific effects are described below.

We all have experienced digestive problems that make us feel sick and yet may not seem to come from any one specific source.  They include feelings of nausea, loss of appetite, loss of taste for food, vomiting, diarrhea, constipation, gas, and more.  Some of these general symptoms are so common and are caused by many things other than lupus. Because of this and the fact that digestive issues can be diffuse and hard to locate, makes getting a diagnosis tricky.  Yet, since lupus can affect any part of the GI tract, these symptoms all need to be taken seriously. For example, one study estimated that approximately 60% of SLE patients that were researched showed evidence of peritonitis, yet only about 10% of these patients were clinically diagnosed with peritonitis before the study.

These symptoms can affect your nutrition, which in turn, can make other symptoms of your lupus condition even worse.  For example, vomiting and diarrhea can cause dehydration, which may make your feelings of pain or fatigue even worse.  Nausea and vomiting can affect your ability to ingest and absorb nutrients and medications.  If you don’t absorb necessary nutrients or your medications that can initiate a downward spiral in your condition, and your ability to deal with all of your other symptoms may be affected.

Mouth and Teeth:  Approximately 95% of lupus patients experience symptoms around the mouth and oral cavity.  Each has its own diagnosis and treatment and they include:

Note:  It is vital for those with lupus to practice good dental hygiene because periodontal disease can trigger many other inflammation reactions throughout the rest of the body.

Esophagus: Inflammation of the esophagus can weaken the smooth muscle tissue that controls the movement of food to your stomach.  A weakened esophagus, or actually a weakened sphincter muscle between the esophagus and the stomach, can allow stomach acid to move back up into the esophagus as temporary acid reflux or long-term (beyond two weeks) gastroesophageal reflux disease (GERD). Treatments may begin with antacids, but GERD may require other medications and changes in diet.

Stomach: Peptic ulcers also occur with lupus, though they are often due to mediations, especially NSAIDs and steroids.  Peptic ulcers usually present as undefined abdominal pain and so can be a challenge to diagnose.  The actual cause of the ulcer is commonly the Helicobacter pylori bacteria.  Unless surgery is needed, most treatments include medications like Zantac and Prilosec.

Small and Large Intestines:  The two most common complaints of the intestines or bowel, come from abdominal pain (diffuse or acute) and a slowdown in the speed at which food moves through them (motility).  Abdominal pain is quite common though studies vary in estimating between 8% and 40% of all SLE patients having these symptoms. There are several conditions, though some quite rare, that produce abdominal pain and they include:

Peritoneum:  Peritonitis is the serious inflammation of the peritoneum, the thin connective tissue membrane that covers the organs of your abdomen.  Peritonitis is usually caused by a bacterial or fungal infection, but it can also be a complication from lupus.  Peritonitis can also lead to ascites, a build-up of fluid in the abdominal cavity.

Pancreas: Acute pancreatitis is not very common; yet it can be life-threatening.  It might be caused by vasculitis (inflammation of the blood vessels) of the pancreas or from inflammation of the pancreas itself.  These can be caused by lupus itself or by some medications, though there are conflicting opinions on this.  Symptoms include abdominal pain, vomiting and nausea.  Diagnosis usually requires blood tests that show elevated pancreatic enzymes like amylase and lipase; CT scans and ultrasonagrams are less helpful than for many other GI tract issues.

Liver:  This large and very complicated organ provides many functions such as producing bile for digestion of fats, filtering old red blood cells, storing iron and modifying nutrients or toxins (like medications) that are absorbed by the intestines.  All of these functions mean that anything that might damage or inflame the liver can have major effects on your health and the effectiveness of drugs. Many diseases that damage liver function produce jaundice, the yellow coloring of the skin by abnormally high levels of bilirubin in the blood.  More detail about lupus and your liver can be found at our blog article, The Elusive Liver.

A 2015 study estimated that liver problems can occur in 19% – 60%, of those with SLE, at some point in their lives. Two of the most common include:

Rectum and Anus: Lupus rarely involves the rectum or anus and is usually limited to ulcers caused by vasculitis as occurs in other parts of the GI tract.  However, scleroderma patients are more commonly affected in this area.

The digestive system is a very complex system of many integrated parts that all must work together to digest and absorb an incredible variety of nutrients and to eliminate everything else.  While each part of this system can be affected by lupus in different ways, the majority of the problems are due to vascular damage from the same autoimmune responses that can affect other parts of the body.  However, it is important to remember that some of this damage can come from the very medications that are used to reduce other symptoms of SLE.  Make sure you take any chronic digestive discomfort seriously and check with your healthcare practitioner if you feel that it may be caused by your lupus.

Evans, C. (2015, February). Interaction Between the Brain and the Digestive System. Presented at the Food Forum: Food and Nutrition Board by the Institute of Medicine. Washington, DC. Retrieved from https://www.ncbi.nlm.nih.gov/books/NBK279994/

Professor Dardis was formerly the Chair of the Science Department at Marylhurst University and is currently an Assistant Professor at Portland State University.  His focus has been human biology and physiology with an interest in autoimmunity.