Monoclonal antibodies (mAbs) are a special class of drug that are still relatively new to lupus treatment.  They are a type of biologic, meaning they are a drug produced in a lab using living cells as biological “factories.”  For years, they have been used successfully in treating certain types of cancer and autoimmune diseases like rheumatoid arthritis, Crohn’s disease and only recently for lupus.

They tend to have very complicated names that end with the letters “-mab,” like rituximab (Rituxan), belimumab (Benlysta), and anifrolumab (Saphnelo).  They are difficult to produce, and that means they are usually very expensive.  However, because they can be designed to target the specific parts of the immune system that produce autoimmune reactions, they are more focused and less likely to produce the side effects of the more generalized drugs such as anti-inflammatories (corticosteroids, NSAIDs, etc.) and immunosuppressants (Cellcept, methotrexate and others).  This can lead to very personalized treatment plans – especially for those who are not helped by first line medications.

You may have heard that monoclonal antibodies, like Regeneron, are increasingly being used to fight COVID-19 infections with this same type of targeted approach.

What are antibodies and what is so special about monoclonal antibodies?

Antibodies are a special kind of chemical (protein) produced by white cells of the immune system.  Their job is to identify and attach themselves to other chemicals, called antigens, which normally are on the surface of bacteria, viruses or other anything else that the body sees as a danger.   Once they attach to an antigen, they either deactivate it or signal other immune cells to destroy the foreign invaders.

Each person has the ability to produce millions of kinds of antibodies, and in the case of an infection or vaccination, the immune system will ramp up antibody production for those particular antigens.  When this happens, the immune response is activated, and that also leads to inflammation.

Monoclonal antibodies, as the name suggests, are produced in a lab by taking one white blood cell, which normally could produce any kind of antibody, and making it produce only one specific antibody.  Then, this white blood cell is cloned millions of times in culture jars so that a large enough quantity of antibodies can be produced.  The resulting monoclonal antibodies are then purified and placed in vials and syringes for clinics and patients to use.

On an interesting side note, the mRNA vaccines designed to fight COVID-19 are pieces of RNA that then “program” the bodies white blood cells to make antibodies for that specific disease.

How do monoclonal antibodies work in fighting lupus? 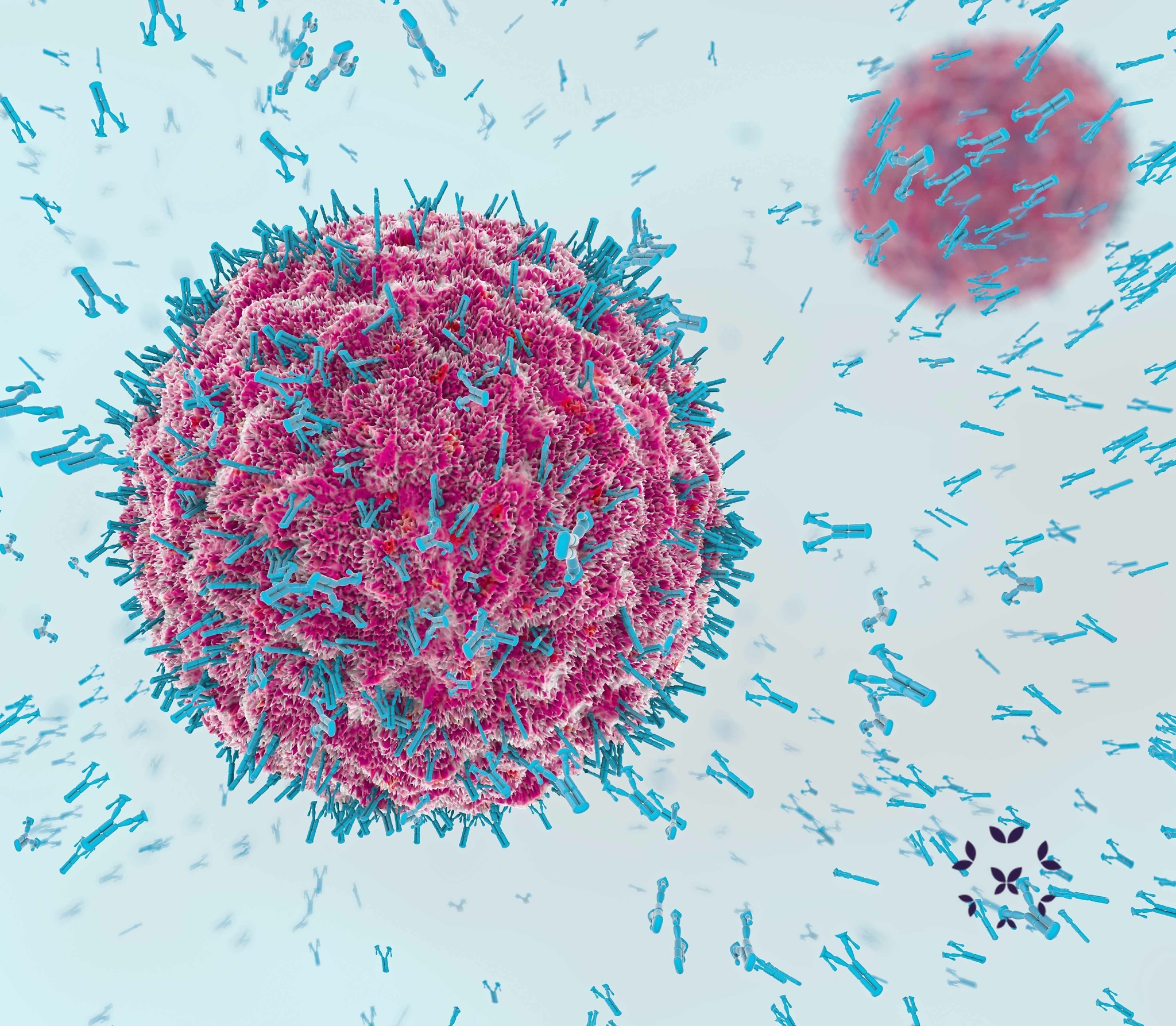 Monoclonal antibodies are not the first line of defense used in fighting lupus.  Initially, drug therapies for lupus entail those that try to limit the symptoms of the disease by modifying a person’s entire immune system.  That usually means treatment with:

Unfortunately, both strategies can have unpleasant side effects beyond treating lupus symptoms.

Monoclonal antibodies use an entirely different approach to fight the autoimmune response.  They do not just limit the symptoms of lupus, they target specific cells, or chemicals from those cells, that produce those symptoms.  Basically, the idea is to artificially produce “good” antibodies that can then attack and destroy the cells that produce the “bad” antibodies!

Since monoclonal antibodies (mABs) are designed for specific antigen targets, each is focused on a particular cell (most commonly B cells) or a specific chemical that make the immune system over-reactive.  Here are some of the most common monoclonal antibodies used in lupus treatments or research and their targets.  Very few are currently approved by the FDA for lupus.

Belimumab (Benlysta) blocks the production of autoantibodies by B cells by specifically attacking a protein called B-lymphocyte stimulator (BLyS).  Without BLyS, “autoreactive” B cells die more quickly and that reduces the damage for those with lupus.  Belimumab was the first biologic to be approved by the FDA for SLE (2011) and lupus nephritis (2020).

Rituximab (Rituxan) has been used for years to treat some cancers and rheumatoid arthritis.  It has not been specifically approved for lupus by the FDA, however, it is the most widely prescribed off-label mAB for SLE.  Rituximab attaches itself to a protein on the surface of B lymphocytes called CD20.  This triggers their death and reduces their ability to produce autoantibodies.  It has been particularly useful in patients who have been non-responsive to corticosteroids.

Anifrolumab (Saphnelo) was approved by the FDA for treating lupus in 2021.  It binds itself to the type 1 interferon receptors that are found on many cells in the body.  In lupus, interferons (a type of cytokine) are over-produced and they cause severe inflammation and organ damage.  Anifrolumab prevents the “autoamplification” of this type of interferon – and the damage it can cause.

Other monoclonal antibodies that have been tested, but not FDA approved for lupus, include:  epratuzumab, which is similar to rituximab, and targets the CD22 protein on B cells; daratumumab, which has been approved for treating multiple myeloma, but also has the potential to target the plasma cells that produce autoantibodies in SLE, and VIB7734, which has been shown to reduce lesions of cutaneous lupus in some clinical trials.  There are several others that have been shown to have the potential to moderate lupus, and the number of mABs that are being tested continues to rise.

How are monoclonal antibodies delivered?

Monoclonal antibodies are delivered intravenously by infusion or by subcutaneous injection. They cannot be ingested orally (in pill form) since they would be digested and deactivated like other kinds of dietary protein.

Using Benlysta as an example, the monoclonal antibody can be given by injection, using prefilled syringes subcutaneously on a once per week basis.  However, for Benlysta, this is only for patients 18 years and older.

An IV infusion can be given to SLE patient in an office or clinical situation 5 years and older or 18 years and older for those with lupus nephritis.  The infusion lasts about an hour.  It starts out every 2 weeks, then changes to a maintenance schedule of once a month.

Monoclonal antibodies have several advantages over other types of medications for lupus.

The challenges with monoclonal antibodies include:

In Conclusion:  Are monoclonal antibody therapies for you?

Monoclonal antibodies are one of the fastest growing kinds of immunotherapies for a wide range of conditions, from cancers to autoimmune diseases – and of course lupus.  They have the potential for the kind of targeted, personalized therapies that may be the key for so many living with lupus … and more are being tested all the time!

However, because they can be so expensive, they often require patients to try front line medications first and show that those are inadequate before they are prescribed monoclonal antibodies.  Also, some monoclonal antibodies can have their own significant side effects.

As always, consult your healthcare providers about your treatment plan and ask questions before you decide on any changes to your medications.  If conventional medications have not been helpful, and if your healthcare team thinks they are worth a try, monoclonal antibodies may be an effective option!

Professor Dardis was formerly the Chair of the Science Department at Marylhurst University and is currently an Assistant Professor at Portland State University.  His focus has been human biology and physiology with an interest in autoimmunity.